During ten years, like a decade, have KFM released one new single every year, all in all ten songs. This year will be the last year of this amazing project. Because of that and the fact that the last single (Hipstermalm) will be released in two weeks time (April 22nd), I took a small chat with KFM, also know as Karl Fredrik Mattsson.

Ten years, ten songs, where and why did you came up with this idea?

I had been longing for a solo project for some time after playing in bands, and also to write lyrics in Swedish. One day I came up with the idea to make one “summer single” each summer, a song that would be released during the summer. I was very busy at the time with my family life (I became a father during that period) so one song a year was what I managed. After a couple of summer singles I realized this was so interesting and fun so I decided to give it ten years, then I would end up with an album.

Talking about these ten songs (which are quite different but quite the same), which are your personal favourite?

“Hipstermalm” is the best song I think. I also like “Att tänka på sig själv” and “Tonårsrum” a lot.

Good lyrics and quite catchy melodies I think.

During this ten years project, what have been the hardest and the most disappointing?

In a way you have to invent the wheel every year, writing a new song, contact people that should be involved for this particular song, starting the engine again. Both music-wise but also things like creating the cover and press release. I also learned that you are always dependent on other people even if you have a solo project, but working with others are also what makes it fun and inspiring. The hardest part is to try to write a really good song every year. When it’s only one song a year it has to be good. The best part is the recording sessions with my fellow musicians and listening to the new song at Spotify or iTunes when it has been released.

Okey, now when this is all over, this particular project, does this also mean that KFM is closed down, that KFM is no more?

So what will you do instead?

I don’t know yet. I haven’t had the time yet to let the fact sink in that this project soon will be over. But first I will release this last song in the KFM project, “Hipstermalm”. I am looking forward to that. 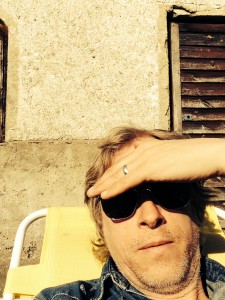