Last week West Side Fabrication released the debut-single “Galileo” (which is play-listed by Swedish National Radio P3) from the fantastic Uppsala act We are the Storm. Since we´re not so familiar with them I took the opportunity to ask them some questions, so here we go;

First of all, who are you answering these questions, and what’s your roll within the band?

I see. So what can you tell us about We are the Storm, and how would you like to describe your music?

– We are the Storm is kind of a band of brothers, for better and for worse. Sometimes it feels like we do everything together (almost everything), and I guess that’s pretty unique. Even if we don’t rehearse or play shows, we always hang out. Like brothers, we always have each others backs, but we fight like brothers too.

– As far as the music goes we try to write music that we, ourselves, would like to listen to. And of course, since we’re six people with strong ideas, different tastes, and a lot of integrity it becomes kind of like a mish mash between everything sometimes. But that’s the beauty of it, I guess.

Out of curiosity, since you’re sextet, do you, as a band, have a common artist (band) that you all like, and if so who?

Haha. And if I say; why did you all end up playing in a band, what’s your comment to that?

– We all share the love of music, and the need to write and make music.

And it’s a bit of a cliché, but maybe to some extent out of boredom. We all grew up in Uppsala, what were we supposed to do?

Uppsala, the fourth biggest city in Sweden with a very large university, is it a good ground for an alternative pop/rock band such as yours?

Last, your first release ever on West Side Fabrication is out, the single “Galileo”. Would you say that this particular song is comparable with what we can expect to hear from the forthcoming album “To the North-Pole”?

– Galileo was actually one of the first songs we wrote to the album. And I do think that it’s pretty comparable with what you can expect from the album – 6 people, all trying to be heard at once (hehe), no, but a lot of heart, a lot of will, a lot of sweat and maybe even a few tears.

Talking about the album “To the North-Pole” which is your personal favorite song on it?

– Oh, that’s a tough one. For us, they’re hard to separate from each other, all of the songs work as a unit, they way an album should be.

Well well, now you have something to live up with, but I´m damn sure you´ll handle quite well.

Nevertheless, Thanks to all of you and good luck with everything. 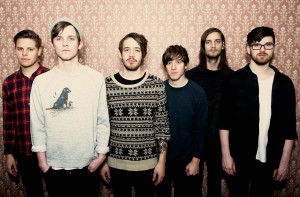